Granular association was invited to propose a formation to perform at OdaGuarda Festival, so they suggested this sextet which performed in Brussels in November 2007
(see related post Granular : : P.A.R.T.S. (Brussels, 3 and 4/11/2007)). If in Brussels we performed with a large group of dancers, at OdaGuarda it was just a concert, though we kept more or less the same frame for improvisation, directed by myself on the spot with gestures. Unfortunatelly there wasn't much audience since the gig was the same night Portugal football team played against Turkey for the European Cup. Anyway, we decided to call this sextet "The Dalton Brothers" because of the height of the musicians: João Martins is Joe Dalton, Ricardo Freitas is Jack Dalton, Emido Buchinho is William Dalton, Miguel Cabral is Averell; i'm still fighting with Ulrich Mitzlaff to decide which of us is Lucky Luke and Rantanplan.
Posted by nuno rebelo at 10:13 AM 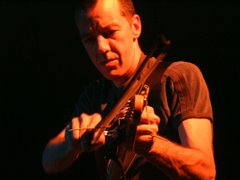